Valentine's Gift (to myself) 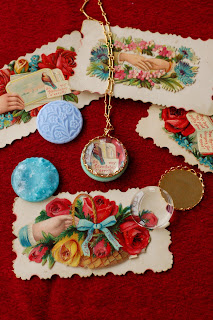 Last Friday I had a pretty massive headache.  Usually the day after I need a low key day to recover. Luckily, on Saturday my hubby was home and we had nothing planned.  There have been some simple jewelry projects in the back of my mind that I just haven't made time to get done.  This necklace is one of the projects that I made.

I have some vintage Valentine and calling cards from my great uncle's estate. I haven't had the time to research them much but some have his family name signed to them.  All were made in Germany. I photocopied one with a bird and put that in the setting. (have had these for a couple years and just now came up with something to do with them!) Than I glued a glass button to the other side. Done! Double-sided vintage-y necklace.

The words say, "On my friendship e'errelly".  Does anyone know what 'e'errelly' means? I tried looking it up on online dictionaries and just googling it, but nothin'. I am guessing 'eternally'. 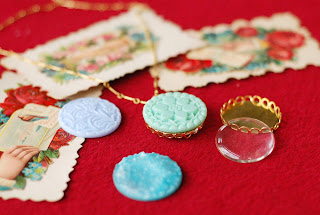 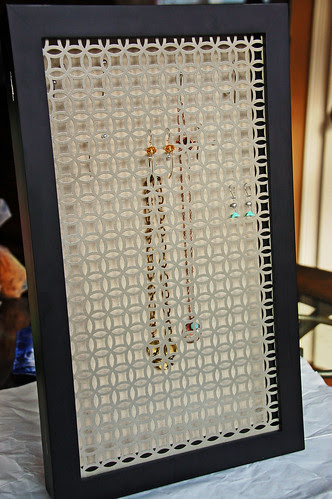 jewelryorganizer, a photo by ShineTrue on Flickr.
When I saw my moms jewelry thrown about on top of her dresser I knew she needed something. But it needed to be on the wall (no horizontal space) and substantial (she has alot of jewelry). I had seen pictures of jewelry organizers using radiator cover sheets in frames but didnt have any frames big enough for her. Than I remembered I have a few memory box frames that I havent done anything with.  This one ended up being perfect. Hung vertically, it is long enough for most of my mom's necklaces (I know it won't hold them all, she needs a tie organizer too!), and it will hold a ton of earrings. I have some cream boxes that I am going to make with a goldtone radiator sheet.  The only downside is that the radiator covers are expensive (in my opinion) but I will be able to use the scrap for smaller frames. 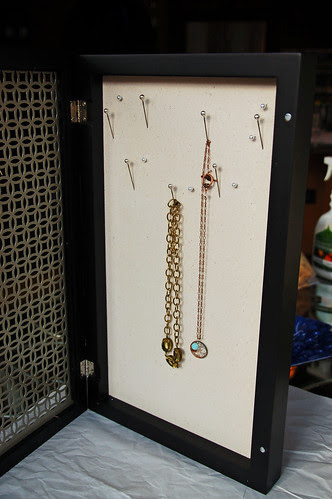 And just so ya know, if I had done a little more research instead of just looking at other people's pictures I would have known how easy it is to cut the radiator sheet.  In the end (after trying every OTHER tool we had) I just used my kitchenaid scissors to cut it to size.
Posted by ShineTrue at 12/28/2011 No comments:

Email ThisBlogThis!Share to TwitterShare to FacebookShare to Pinterest
Labels: Organize 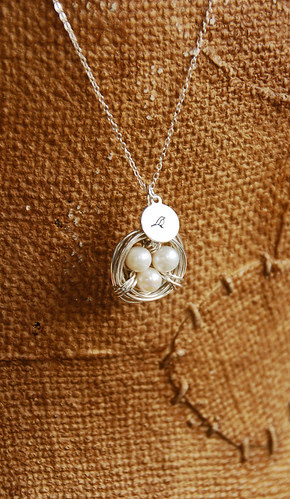 birdnestedit, a photo by ShineTrue on Flickr.
My first attempt at making a bird nest. I am happy with how it turned out, however, again, it took me longer than I expected. Why? Because the thicker gauge wire was hard (you can choose between soft, half-hard, and hard) it did not want to wrap easily. But I beat it into submission and am happy now. My only question, leave the bird charm or lose it? It is one of my latest stamps, so I felt the need to use it, but wonder if it takes away from the nest pendant.
Posted by ShineTrue at 12/21/2011 No comments: 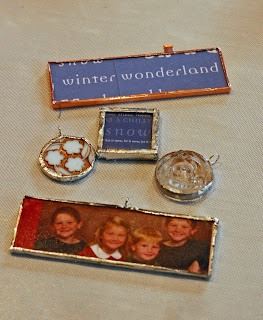 Looking at my stash the other day I realized that I have some buttons resembling snowflakes.  Figured this might be the time to do something with them.  So I decided I wanted to make them into pendants with a technique I learned a couple of years ago.  I took a class (one, very short class) on learning how to make "memory" frames with no-lead solder.  You may recognize those kiddos.  If you send me a picture Christmas card I keep it.  I hope to someday have a whole wreath filled with little pictures of family and friends on it.  Thank goodness they now make metal frames you can just drop the glass into, because I don't see ever getting that project done this way.
It's been awhile so I figured I would practice. There is some prep involved beforehand and as you can see the "winter wonderland" frame is the bare copper tape and does not have any solder on it.  You can also probably see the glass is cracked. Whoops! Glass is fragile! Who knew?

So not a very good job. 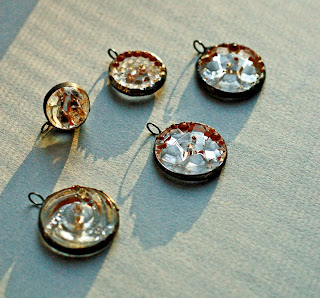 But then I found out that buttons are ALOT easier than shapes with corners.  So a little better.  I also found out that the reason people blacken the solder in these projects is that it HIDES not so great spots, making the bumps look more "artistic" (are you buying that?).  I also found out that copper tape reflects back into my buttons and my very smart friend Jennifer recommended that I buy the copper tape that has black on the inside to avoid the reflection.  But being impatient, I just went ahead and finished with what I had.  I know this picture isnt the best, I am still learning how best to photograph clear glass.

And just for fun I practiced wire wrapping a marble: 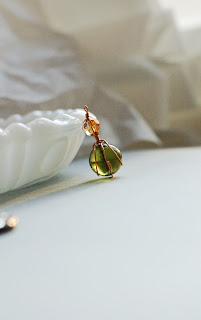 Ok. So technically, this is not a craft done WITH my 2 sons or jewelry, but really, can ya blame me for blogging about it?  I do have to give credit where credit is due - I found a picture on Pinterest originally from Rook No. 17 about 2 months ago. So I thought, if my son didn't voice an opinion on his costume and I could find an appropriate basket than I would go for it.

Well both those things came together - found the basket at an estate sale for $1.25 and Zac couldn't seem to care less about getting dressed up.  There are many things that I LOVE about this costume.  First, of course, is just how cute it is! Second, you can dress your kiddo for the weather conditions (lucky for me it was cold enough for him to wear his aviator hat and coat which we already had).  Third, it makes your toddler MORE visible to traffic (not that it was a concern on the 2 dead end streets we were on!). And fourth, it was NO SEW!

I think it is pretty easy to figure out how I did this.  First, I cut out the bottom of the basket.  Next, I tied on some ribbon to go over his shoulders. Then I tied on some brown paper "weights".  What took the most time was blowing up the balloons and tying them on strings (had the balloons and helium left over from big brother's birthday). I tied the balloons together at the bottom and then tied them to both ribbons on the back (this was to help keep the shoulder straps from falling off - and it worked).  The original costume had one BIG balloon that did look great, I just never got to that step, since I wasn't quite sure the little guy would go for doing this.  At first he did protest, it took a few minutes, and you can see in the picture he is pretty seriously considering rebelling.  But he was a trooper and I think he enjoyed the attention and the balloons!
Posted by ShineTrue at 10/31/2011 No comments: 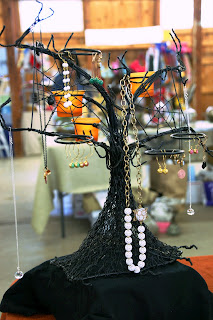 I survived my first craft show!  I didn't do as well as I hoped, there wasn't much traffic most likely due to the high winds outside.  The vendor next to me who was pretty experienced said she felt there was plenty of press but thought the weather and other events were keeping people away.  She gave ALOT of advice. I received alot of positive feedback on my display (the coordinator loved my setup and was surprised it was my first show) and another jewelry artist said she was going to steal my idea for the chalkboard plates for her displays.  I will say that the few women that I consider my "demographic" that stopped - bought, so I guess that is good! I have alot of good ideas for my next setup - next show is in November so obviously have to ditch the Halloween theme.

Feel free to leave a critique - I am trying to learn! 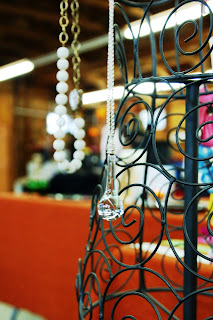 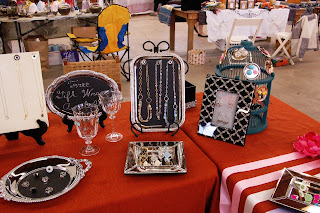 Just because I can... 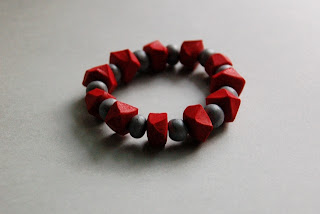 doesn't mean that I will want too! I found this out with polymer clay. After seeing cute ornaments from Oodles of Ornaments at a street fair (where I bought a very reasonable priced "peas in a pod" ornament that she personalized with the boys names) and the cute items at AMerryMishap I decided that this may be a craft Nic and I could do together. Michael's happenned to have a sale that week so Nic and I picked out some colors. 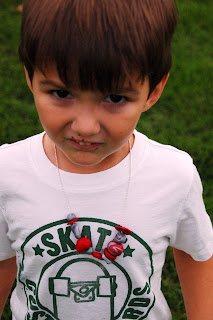 Well, we did enjoy making our beads - for awhile. Then Nic got bored and wandered off while I was stuck there rolling little pieces of clay between my hands. The Ohio State bracelet is my handiwork! And Nic was really excited to string his beads for a necklace for grandma.  That is him in the pic showing off the necklace.  So I would say this was a successful craft with him - I think we will make something Halloween themed soon, but I don't see it becoming part of my jewelry line.

Well back to getting ready for the show on Saturday!
Posted by ShineTrue at 10/13/2011 No comments: